Please. For now, stay at home.
Explore the world from your armchair until it's safe & responsible to travel again.
Now wash your hands!

As an Amazon Associate we earn from qualifying purchases. For more info, please check our Disclosure page.

After some seriously heavy rains in the Albufeira region, we had pulled up to take shelter. The main highways were suffering mud slides and even Mowgli, with all her 7.5 tonnes of weight, was being buffeted around the road. In the local café, while having coffee we watched the local news describing the serious floods in Albufeira town centre. Albufeira is a very popular tourist spot and currently had a 2 metre high river running through the Main Street. Despite an extensive clean-up operation being underway, Albufeira remains open for business.

Throughout the news bulletins we could see that both property and people were in grave danger. We checked on Twitter and Facebook to see if we could help. Mowgli can cope with deep water (although 2 metres deep is pushing it) and we have winches, strops, recovery gear, fresh water and some emergency supplies. 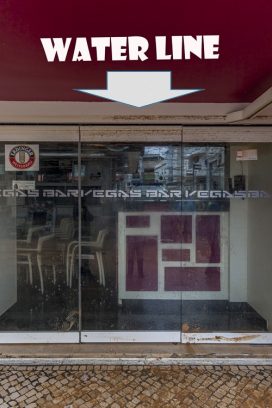 #albufeirasos was our key line of real time information and our offer of help was acknowledged. Mowgli’s capability was not required. The local emergency services had enough equipment to manage, but we were asked to come and help once the waters had receded. I could understand this as the professionals don’t need us to be getting in their way. 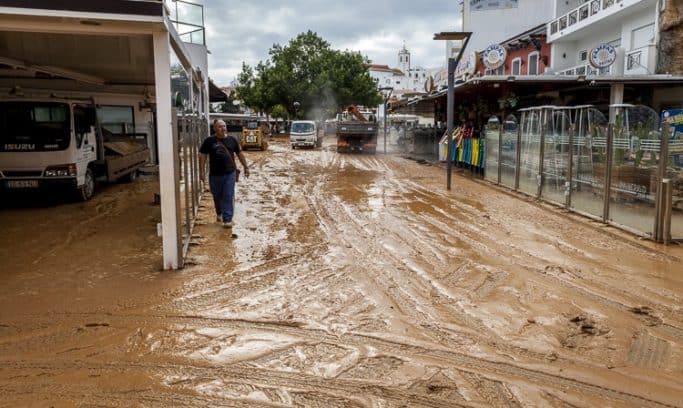 It took 2 days before waters receded and the recovery operation got into full swing. The area had to be cleared of any injured parties and unsafe buildings. We arrived in the town hall along with 30 or so other volunteers. We all registered our details for insurance and council records and were issued with waterproof jackets, trousers, gloves and wellies.

While we awaited for the arrival of our regulatory day glo council jackets, the Mayor popped by to thank us for our help. He chatted to the group and someone mentioned that we were English holiday makers that had come to help. He spoke to us in in English and simply said, “Thank you. While we have heart, we have Albufeira”. 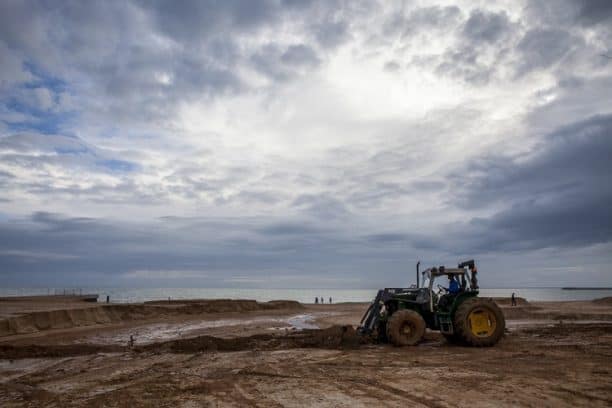 After a short while, the missing day glo jackets could not be found, and the search was abandoned. It was decided we could proceed in our teams without the jackets. Common sense prevailed over EU health and safety guidelines.

Split into small teams, we were assigned to 2 English speakers, both ladies working in the local schools. They welcomed us and looked after us all day. We walked in our groups into the main streets and a scene of devastation and also a hive of activity. 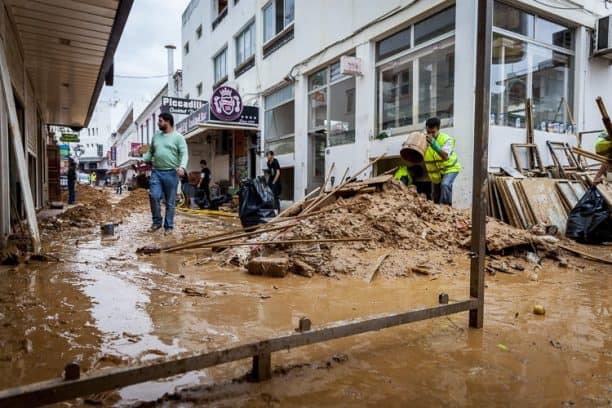 There were mounds of mud and rocks all along the roads. Underground car parks were being pumped out but were still full of submerged cars. Teams of people helping empty shops and café owners were hosing out and beginning to clean up, preparing to re-open for business. 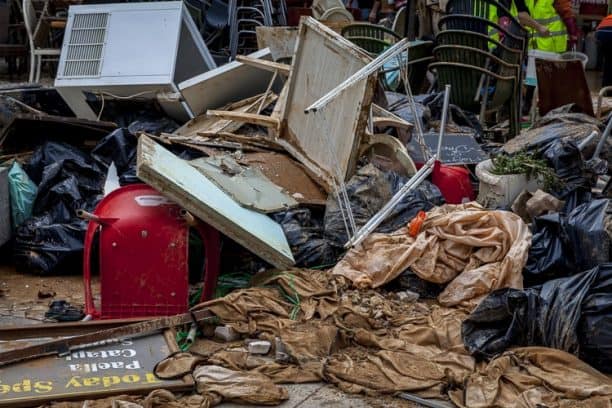 We began emptying muddy stock from the shops. It was piled high on to the main street, where council workers would come along with pick-up trucks and jcb tractors and scoop up the rubbish. It was amazing how much waste and damaged had been caused.

The flood came in seconds from the mountain rivers and hit the town at the same time as an extra high tide . The water had nowhere to go. Whilst this flood cost the life of one elderly gentleman trapped in his submerged car, it was fortunate that this was low season, on a Sunday morning and before many people were around, else I suspect there would have been more lives lost. 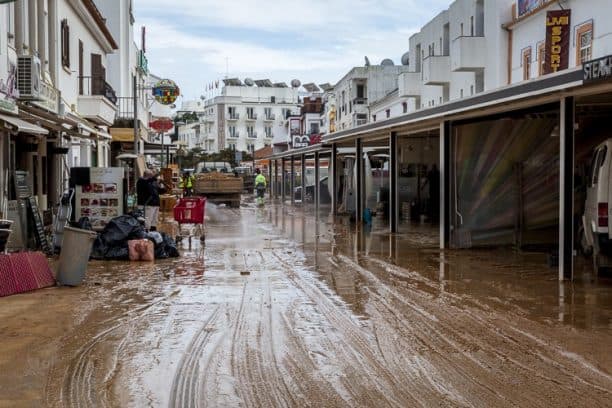 With the devastation and destruction around, it was clear that many shop owners are facing some serious financial hardship in the coming months. Despite this, the sadness and an occasional small tear in the eyes of the towns people, everyone was welcoming of the volunteers. In between the work, many would stop and talk not only of the impact of this event, but also to understand those who had come to help. 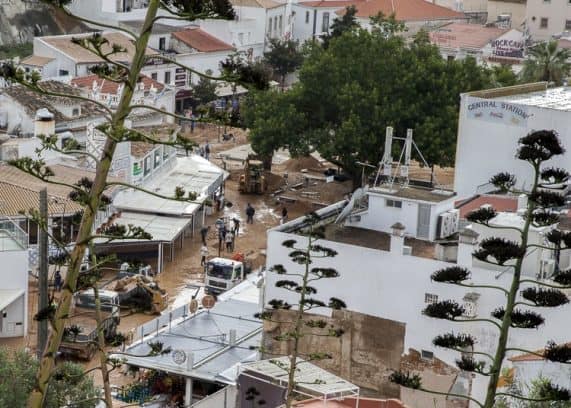 Of course the media were here in force and during a break for food, kindly provided by the council and local business,, the media interviewed the volunteers. As you might expect, being one a few non Portuguese here we were interviewed for primetime Portuguese news. I am sure it was an interview worthy of a Pulitzer Prize and I am just waiting for the Hollywood contract to land for the block buster feature I am sure they will film. 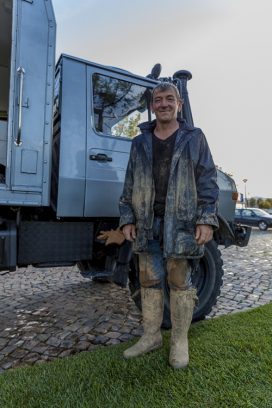 We continued helping put the town back together and along with supporting visits by the town’s Mayor and other dignitaries it was clear that progress was being made.

Flood damage is awful; the power of the water can bend metal, break down walls and destroys everything with a mud, silt and sewage laden compound that leaves a dyed tied mark on whatever and whoever it touches. My fingernails are still stained several days after our help. 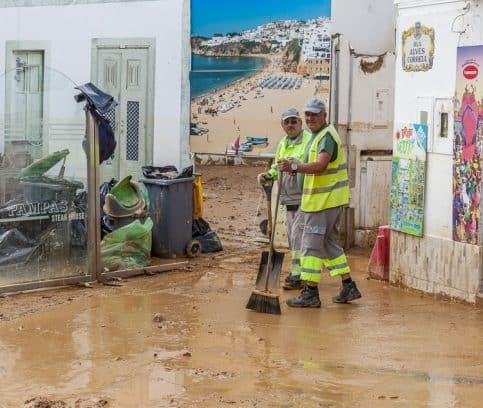 Albufeira may have been down, but she is not out, and within a few days the Main Street was open for business. Much of the town was unaffected and continued full swing to provide the full range of holiday services and hospitality that she is famous for. Albufeira remains very much, open for business. We’d guess that the clean up operation will take another few weeks yet, by which time, cosmetically at least, you’d never know what had taken place here.

And for us at Mowgli Adventures, we hope our small efforts helped and one day we promise to return and to enjoy Albufeira in the sun.

You can keep up to date on the ongoing clean-up activities on the AlbufeiraSOS Facebook Page. To see that Albufeira remains open for business, follow this Facebook page supporting the region.

Enter your email address below and we'll send you the goodies straight to your inbox.

We’re Angela & Graham, the British couple behind the photography and overland travel blog, Mowgli Adventures. We've been running this site since 2014 and have become full time travel bloggers and overland travellers. We visit all the places we write about personally, usually having arrived in our diy camper van conversion, Baloo. All our content is based on our own first hand travel experiences, and we take all the photos you see on our sites. Read more about us here. For a guided tour of our 4x4 Sprinter van conversion, Baloo click here and if you fancy converting your own camper too, don’t miss our camper van conversion guides. You can also get our regular updates and daily dose of wanderlust on our Facebook page.

Roasted Chestnut Fiesta and Not A Game of Conkers in Sight

Tetouan: A Town of 2 Halves

Our 6 Favourite things to do in Spain

We are a participant in the Amazon Associates Program, an affiliate advertising program designed to provide a means for us to earn fees by linking to Amazon and affiliated sites at no additional cost to you!

Get the latest articles & special offers delivered directly to your inbox.

Get the latest articles & special offers delivered directly to your inbox.