If you’re planning on living in a van full time or even for a few weeks at a time, you might want to think about buying and installing an inverter.

Most campervan conversions include at least a small battery bank for charging 12v DC appliances and devices.

But what about household appliances like charging laptops or running a TV? These need AC power so an inverter is an essential bit of kit.

This post will help you understand the basics of 12v power inverters so you can decide if you need one, what size it should be and other features to look for when buying.

We’ve recommended our top picks of 12v power inverters and included an installation guide at the end of the post too.

What does an Inverter do in an RV?

In the most simple terms, an inverter changes DC power to AC power. But why would you need to?

You can wire your DC appliances to the battery and they’ll run happily. Things like LED lights, a 12v fridge, USB sockets and ventilation fans.

Instead, stored DC power must be converted to AC first and the inverter steps into do the job.

Some RVs already have an inverter installed. But if your camper isn’t one of them, the in-built inverter has failed or you’re building a camper conversion, you can buy a separate inverter.

Why do I Need an Inverter in my RV?

The short answer is, you don’t.

If you can avoid running any AC appliances when off-grid, you don’t need an inverter.

With a shore power electric hook up, you can still run AC appliances when on a campground though.

Battery banks have a finite amount of power and whatever you use needs to be replaced, either from a camper solar setup or charging from the camper’s alternator when the engine is running.

Avoiding powerful AC appliances where possible when not hooked up will help keep you off grid for longer and may save the need for a large battery bank.

All that said, if you still want to run even a small number of AC appliances on batteries only, you need an inverter.

Need more advice and support on a specific part of your campervan electrics? Join our new Facebook Group to connect with a growing community of like-minded van builders.

How Does an Inverter Work?

DC power travels in one direction, seemingly a straight line.

Basically an inverter consists of a series of switches, diodes or transformers.

As the DC current enters the inverter, these diodes open and close in rapid fire, either 50 or 60 times a second, depending on what frequency the supply provides.

This turns the straight line, single direction DC voltage into the characteristic wave of AC, amplifying its voltage value from 12v to either 110v or 240v, as per the manufacturers’s specification.

There are 3 different types of inverters:

What is a Square Wave Inverter?

The inverter creates a “wave” that flips between positive and negative voltages instantly rather than more gradually.

It pauses at the AC voltage level before flipping to the opposite polarity.

The component parts are simple, so square inverters are low cost.

This waveform is far removed from that of the mains supply, which is a pure sine wave.

Typically, square wave inverters are ok for running lights and mechanical fans. Sensitive electronics can be irreparably damaged if connected to one of these though.

The applications for square wave inverters is so limited, there’s very few, if any models available on the market today.

What is a Modified Sine Wave Inverter?

Rather than instantly flipping between extreme voltages, it produces a smoother waveform, though still a little clunky.

Following the general shape of a pure sine wave form, the voltage increases in increments with tiny pauses in between until it reaches the AC voltage level.

The power inverter then reduces the voltage in similar incremental steps until it reaches the opposite polarity.

What is a Pure Sine Wave Inverter?

A pure sine wave inverter most closely matches the power from a mains supply.

The voltages it produces increase and decrease in a smooth transition from positive to negative.

The waveform is smooth, giving a clean consistent supply of energy.

This inverter will run all your electrical appliances and campervan gadgets.

Though a pure sine wave inverter is more expensive than a modified sine wave, it won’t damage your sensitive electronics.

This is why we recommend pure sine wave over modified sine wave inverters.

What Size Inverter Do You Need?

Power inverters are sized in watts.

If you read any of the campervan conversion forums, you’ll likely see posts and conflicting opinions on what size inverter you need in a camper.

In theory, the inverter needs to be powerful enough to run the AC components connected to it at any given time.

We recommend a rating of about 25% higher than the expected maximum load you intend to put on the system.

The camper’s electrical system needs a much larger inverter to run them all at the same time than if you limit yourself to only using one at a time.

So why not just go for the largest inverter so you have the flexibility to run them all at the same time?

You can but remember, you can only take out of the batteries what you put in.

Using inherently power hungry AC appliances needs a lot of battery juice and the solar panels or engine’s alternator need to recharge them so you don’t end up with flat batteries.

To help you figure out what size you need, we’re created an inverter calculator. It will also help you assess what size solar system you need to power it too.

What Size Battery Do You Need?

Campervan batteries should be sized to cope with your overall electrical demands.

To figure out the size needed, you need to take into account all expected load – both AC and DC appliances.

But converting DC to AC isn’t an efficient process so any AC calculations need to factor this in.

Use our battery bank calculator to help figure this out – it already takes inefficiencies into account so you don’t need to worry.

Many power inverters include in-built auto cut off features so they stop running if the battery bank falls to below a certain level.

It’s a great feature to help protect the battery bank from over discharging and so help prolong their life.

If you have AC appliances you’ll only ever use when on a campground, like a washing machine or air conditioning, keep these on the main supply circuit and not the inverter.

This will help keep the size of the battery bank needed down.

What to Look for When Buying an Inverter

There’s a lot of inverters available on the market.

Even once you’ve calculated the size needed, there’s other aspects of the component’s specification important to look at before making your final decision.

This is usually the labelled rating of the inverter.

A 1000w inverter can provide continuous power of 1000w meaning it can supply this amount of power for as long as there’s a sufficient DC supply.

Inverters can provide a greater surge of power in short bursts. This is especially useful for appliances that demand a power surge on start up, like a compressor fridge.

They take a large power surge to get going, before quickly dropping back to their running level.

Inverters often have a peak rating greater than the continuous power rating.

Check your appliance specifications for any surge demand.

This indicates the voltage of the battery bank need to supply the inverter.

Most RV and campervan electrical systems have a 12v battery bank. Some have 24v and even fewer have 48v. Buy an inverter to match your battery bank voltage.

Some manufacturers display the output voltage as a range.

Buy an inverter the same output voltage as your devices.

Static Current or No Load or Idle Consumption

This is how many amps the power inverter uses with no appliances on it.

Aim for a low no load level though if it’s a little higher, you can always turn the appliance off when not in use.

Just make sure to install it somewhere convenient unless it has a remote control.

And remember those batteries at night when your solar panels aren’t getting any sunlight!

An inverter with an idle consumption of 1 amp will use say 8 amps overnight but a 5 amp device would use 40 amps in addition to any load running at the same time.

That could be a hefty proportion of your total battery bank.

This is the overall efficiency of the inverter. An inverter with a 90% efficiency rating uses 10% more energy than the device its supplying.

The efficiency rating often falls with age so check the specifications carefully.

Most inverters come with at least some safety protection features, offering greater reassurance and protecting the van electrics.

They vary from device to device but here’s a list of common features:

This is the best budget campervan power inverter for living in a van.

With 2 AC sockets and 2 USB ports it can charge up to 4 devices at once, though you probably rarely need all this.

It’s no frills so best located somewhere easily accessible to switch it off and on.

Despite its low cost, it still has plenty of safety features designed to protect from over heating or depleting the battery bank too much.

We’ve used this for over 3 years living in the van full time and never needed more.

So much so we have 3 of their products on our best of list.

Their 700w pure sine wave inverter is their smallest model. Budget friendly and packed with safety features, you won’t discharge your batteries too much with any of these Renogy inverters.

This 700w device includes a couple of power outlets and a wired remote control too.

Stepping up a size, this 1000w pure sign wave inverter delivers pretty much everything you could realistically expect to power off-grid with a reasonable size battery bank.

Some RV owners and van lifers need big, heavy duty inverters and Renogy is our recommended go to brand.

Physically larger than the smaller devices, both the 2000w and 3000w Renogy inverters and extremely well built.

They’re packed with safety features including short circuit protection, overload protection for both DC input and AC output and much more, so you can use these confidently in your precious van conversion.

With a long wired remote, positioning the appliance out of the way is a realistic option.

This should be enough to satisfy the most power hungry devices you’re likely to find in any camper.

Make sure to use our exclusive Renogy discount code when buying direct from Renogy.

Just enter “Mowgliadventures” at the Renogy checkout for an automatic 10% discount off all eligible products.

Here’s a simple overview of an RV inverter wiring diagram.

Below you’ll find the instructions on how to wire an inverter in an RV. 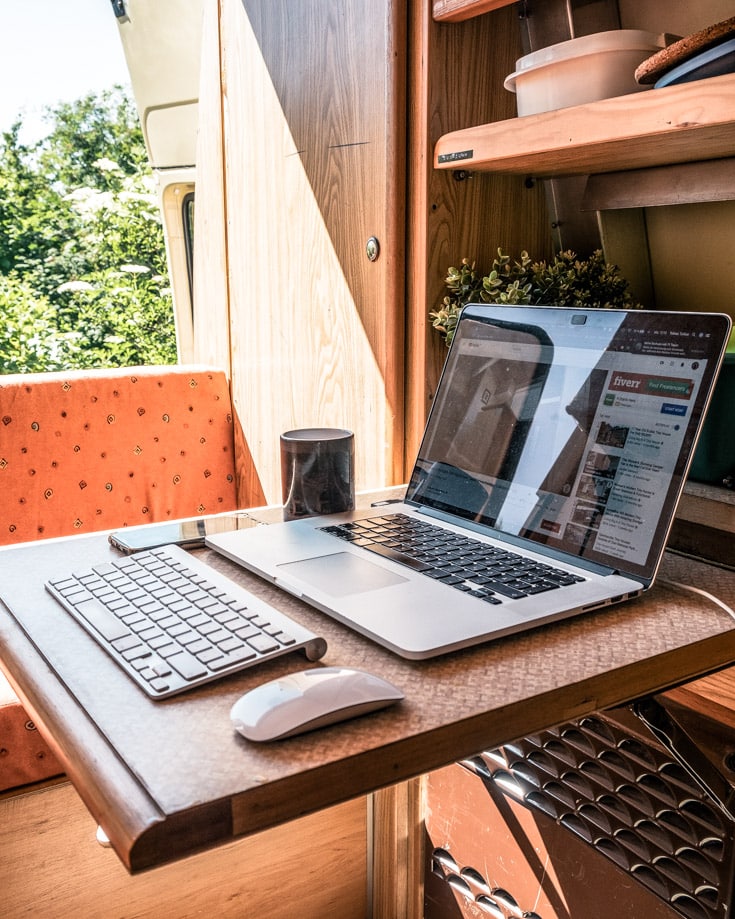 Previous
11 Campervan Electrical Components You Need In A Conversion 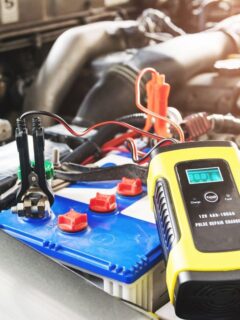