Say the words Fray Bentos to us Brits and our mind’s eye fills with images of tinned pies. We get all nostalgic over mouth watering memories of meat pies packaged and baked in flat blue tins.

The oddly fabulous pastry top had a slightly soggy underside which was arguably the best part. So to us, it’s astonishing to find a town named Fray Bentos.

Hugging the banks of the River Uruguay, it’s a town not only called Fray Bentos, but the very place from which the iconic tinned pies hail.

Yet more improbable, Fray Bentos is home to the abandoned and decaying meat processing plant. It even holds the coveted UNESCO status of World Heritage Site. So of course, we popped in for a guided tour.

A brief history of Fray Bentos

The Fray Bentos Industrial complex is more than simply a slaughterhouse. Founded in the 19th century by a German chap – Justus Con Liebig – Fray Bentos was where beef extract – better known as Oxo cubes – was made on a huge scale.

Justus branched out to corned beef and the factory experienced boom time. People from not just all over Uruguay, but from over 50 countries worldwide came to work here and the town grew to accommodate the increased population.

Corned beef and Oxo cubes made meat produce accessible to the poorer classes in Europe and production increased to meet the growing demand.

With the onset of WWI, single portion sized tins were produced, enabling the soldiers to continue the fight from the trenches – a marked change from when wars were fought on a seasonal basis.

By the mid 1920s, the company changed hands, passing to the British Vestey family. The renamed Frigorifico Anglo Del Uruguay S.A factory continued to flourish, branching out to meat packing and taking advantage of cutting edge technology in refrigeration.

The enormous refrigeration building, old and dilapidated now, could hold upto 18000 tonnes of frozen meat! Refrigerated ships were loaded at the pier before setting off for Europe weighed down with frozen meat, leather, oxo cubes and corned beef.

At the height of production, 16 million tins of corned beef were shipped to Europe in 1 year – 1943 – the South American influence on WWII.

Click here for more off the beaten path destinations in Uruguay

The end is nigh

By the early 1960’s, demand for Fray Bentos products was waning due to an improved economic outlook in Europe. The once cutting edge technology was becoming dated and production began to decline.

By the 1970s, the end of the Fray Bentos factory in Uruguay was inevitable and after a final slaughter of 483 cows in 4 hours and 15 minutes, the factory closed.

If it wasn’t for the building of the international bridge between Fray Bentos and Argentina, this would have spelt disaster for the workers and much of the town.

Since the bridge was completed, a paper pulp factory has opened to the north of the town so employment for the population has continued. Today Fray Bentos, Uruguay is a laid back place to spend a few days.

Read more: Our Uruguay travel guide to help you plan your trip

The site is somewhat eerie but without question a marvellous feat of engineering and manufacturing. At the height of production, the slaughterhouse dispatched 1600 cows every day and a few sheep, pigs and chickens too.

At the heart of the success of the factory was the enormous refrigeration system. An entire machine room holds the engines needed to keep the system working around the clock, maintaining a steady temperature to protect the quality of the meat.

Today the windows are cracked and broken. Birds nest amongst the rusting machinery and foliage encroaches through the original marble floor tiles.

Fancy a beach holiday in Uruguay? Here’s a great itinerary!

The Fray Bentos factory was the first place in Uruguay to generate electricity – even before the capital city, Montevideo.

The non-conducting marble control room was impressive for its time. Damp, rust and moss are overtaking here too, the dials stuck in random positions.

This room must have been horrendous for animals and workers alike. The gravity fed production line started with the cows herded up towards their impending fate.

Perhaps if they knew their final destination at the end of the wooden pier was a stun cage, they may have kicked up more of a fuss.

With military precision, every part of the animal was used – nothing went to waste.

Much of the tour takes us on a journey through the site, although due to unsafe structures, not every room is accessible. We pass rooms filled with hooks once used to move carcasses around between processing areas.

Peeking through dirty windows at the dormant corned beef boilers, we can only imagine the once industrial cacophony.

As with any business, administration and management needed a place to sit. The offices today are almost as they were left and with a distinctly British feel.

We wander around, the warped wooden floor boards creaking under foot. Typewriters and cash registers perch on every desk. Some offices house enormous Chubb safes.

This was the business centre for managing more than 200 products shipped around every continent for 116 years.

Read more: our 6 favourite places to visit in Uruguay

And this is what it was all about. The humble Fray Bentos Pie – amongst many other animal products.

The industrial revolution in Uruguay started here in Fray Bentos and while it may now be little more than a museum, there’s no doubt it changed global eating habits forever.

The museum is open 6 days a week from Tuesday to Sunday. Guided tours are available at 10am and 3pm, and the morning tour is conducted in English (except when we visited). Entrance is free on Tuesdays.

Otherwise UYU$50 will get you in or better still, UYU$120 will get you a guided tour – only useful if your Spanish is better than ours or you go on Tuesday when it’s free. A bike tour of the ground is possible too for UYU$150.

There’s no need to book in advance and parking is no problem either. Click here for the museum’s website.

Where to stay in Fray Bentos

Free camping along the riverbank

For those fortunate enough to have your own camping gear or better still, camper van, you have the option of the best accommodation in Fray Bentos.

This beachside spot is a stroll away from the museum – just follow the road around from the entrance. This spot comes with direct access to the river, fishing, free roaming horses and, ironically, the occasional cow.

Best of all, it’s completely free. Of course there are no facilities here although for those without a toilet in the campervan, there’s toilets at the museum.

Fray Bentos really is off the main tourist map and with that, there’s little in the way of huge choice of accommodation in town. There’s a few hotels and guesthouses though (8 the last time we checked).

You can check prices and availability here but you may be better off booking on arrival. The town is rarely busy.

How to get to Fray Bentos

Fray Bentos is 330 kilometres northwest of Montevideo. Driving is easy by following Ruta 1 westbound, then taking Ruta 2 northbound at Colonia Valdense. Carry some cash for the toll roads along Ruta 1.

Fray Bentos to Montevideo takes almost 5 hours by bus. Visit the Tres Cruces website for all buses into and out of Montevideo. Prices to get to Fray Bentos are around UYU$700 and there’s at least one bus every couple of hours.

Click here for our guide on driving in Uruguay 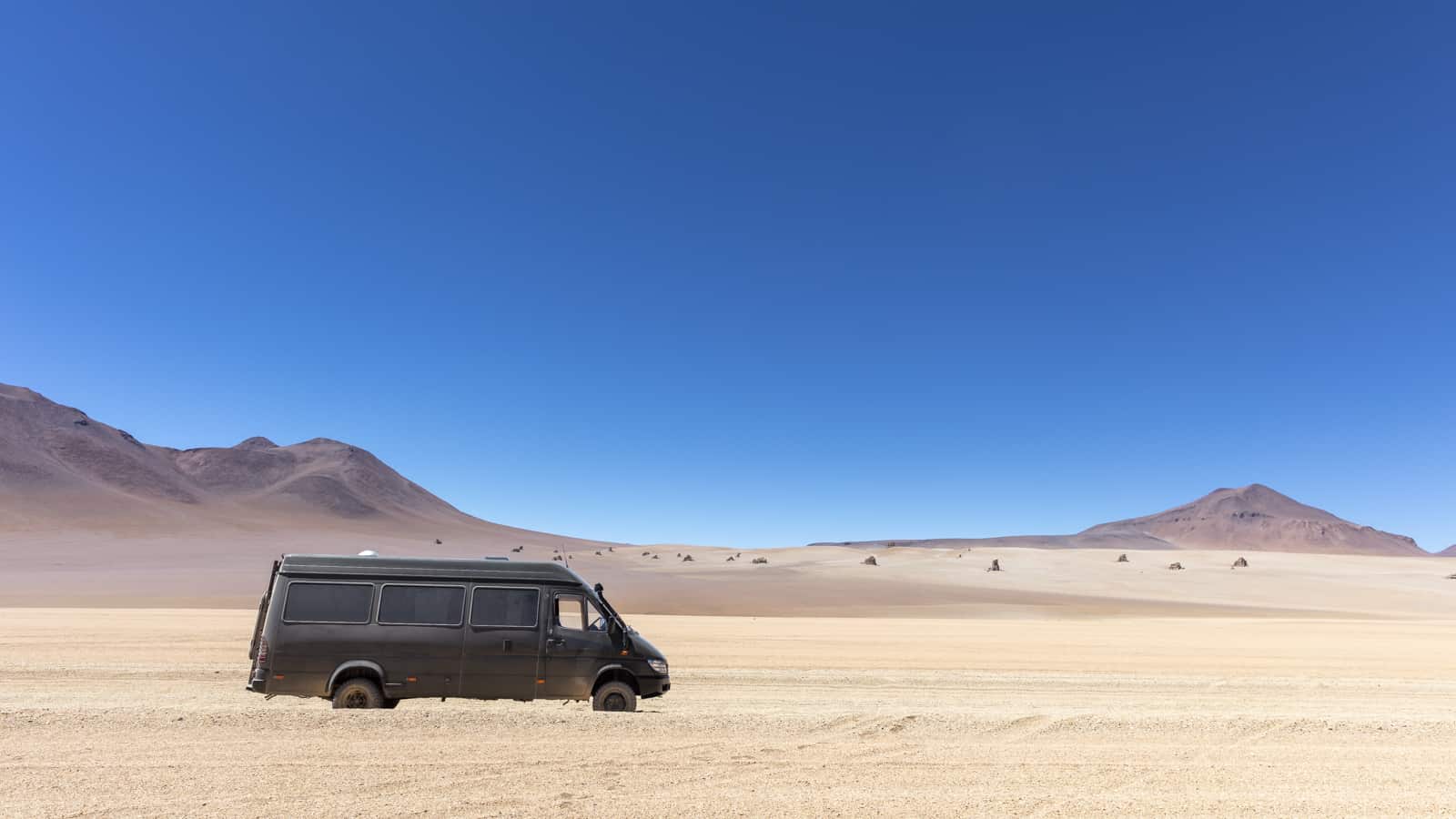 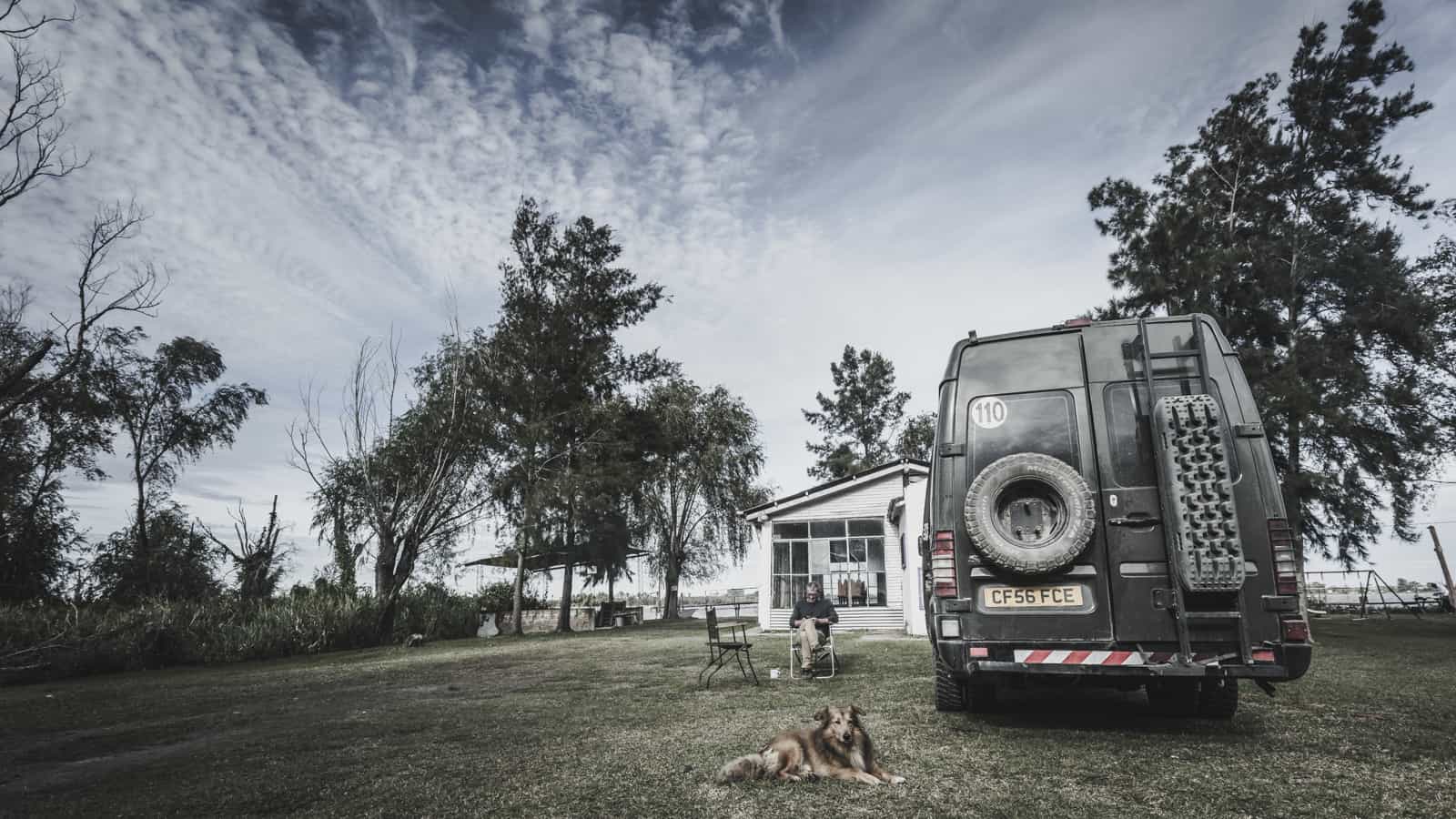 Next
What is overlanding?
Click here to cancel reply.