The Guaraní Jesuit missions of Argentina are located in the northeastern province they gave name to Misiones. UNESCO declared the remains of the missions a World Heritage Cultural Site in 1984. So we set out on a mission of our own, to discover what they’re all about.

The Atlantic Forest in Argentina

Flanked on 3 sides by the Atlantic Forest, our camp overlooks the vast grey expanse of the River Parana. The sun is already setting, crickets have come to life as parakeets and toucans screech between perches.

Towering cliffs down river glow amber in the fading light. The humidity of the jungle makes for a sticky atmosphere. One perfect for hungry mosquitos willing to dine on the finest British meat around.

We’re parked on a coarse sandy beach on the Argentinian side of the watery border with Paraguay. The Jesuits and their Guaraní converts saw this landscape when they first arrived in the 17th century. It’s unchanged except for the addition of a parasol or 2.

Over the past couple of days we’ve driven 250 kilometres north from Ibera wetlands in the neighbouring province of Corrientes to San Ignacio in Misiones.

While we travel slowly, the change in landscape has been rapid. Once we navigated 130 kilometres of slippery, muddy tracks the flat landscape of the wetlands was behind us.

The next 70 kilometres were dominated by yerba mate trees, a telling sized plantation to feed the South American obsession with the warm beverage. Crossing into Misiones province, the jungle begins to encroach and the tropics feel close.

This is part of the historic homeland of the Guaraní tribe, a semi-nomadic indigenous population of this region of South America. We’re told that of the few thousand remaining in the tribe today, none have retained the cannibalistic tendencies of their forefathers.

The Guaraní tribes of Argentina

Back in the 16th and 17th centuries, the Guaraní tribes were persecuted by slave traders while Spanish conquistadors used their slave labour.

Around the same time, the Jesuits arrived in South America with the aim of spreading christianity. In effect, the Jesuits called on Spanish rule to allow them to convert the Guaraní people rather than enslave or kill them.

The Jesuits set up the missions as a refuge, moving thousands of Guaraní people from the hostile areas in the north to the relative safety on the Parana River basin.

In return however, the Guaraní people had to conform to the christian way. They took classes, learnt to read and speak Spanish and the Jesuits baptised them.

In essence, the choice was between slavery or protection and the cost of the latter was the Guaraní culture. For most, the choice was easy and so the Jesuit Missions grew to over 100,000 across 30 missions in the region around Paraguay, Argentina and Brazil.

In 1984, UNESCO declared 4 of the Guaraní Jesuit missions of Argentina World Cultural Heritage Sites. 3 of them are a stones throw from our camping spot on the river: San Ignacio Miní, Santa Ana and Nuestra Señora de Loreto.

San Ignacio Miní is located in the nearby town of the same name and is the most preserved of the 3. Although the downside is the number of tour buses and tacky souvenir shops outside.

Santa Ana is 15 kilometres south towards Posada and has no stalls outside selling genuine mate gourds made in China. Nuestra Señora de Loreto is more jungle than mission although in its day, was the largest of the 3 sites and home to 7000 people.

Because of the varying state of repair at each site, we visited all 3 sites. This allowed us to imagine how the Missions looked before the Jesuits were kicked out. Each Mission had a church, school and workshops for craftsmen to learn their trade.

Only 2 Jesuit priests ran each site of between 4000 and 7000 Guarani converts.

The residents farmed and made handicrafts for trade both nationally and for the export market. The first printing press in Argentina was at Nuestra Señora de Loreto so they could print their own books.

And art was important to society with yerba mate used to paint – understandable when you see how it stains the inside of our gourd.

The Missions introduced their own justice system and abolished the death penalty. Destitute families were provided for. Rank was not without its privileges and the Jesuit priests certainly had an easy life compared to their converts.

They had their own bathrooms albeit their toilet was like ours, a composting loo – not a new idea after all.

Wandering around these 3 Guaraní Jesuit missions, its difficult to know what to really think of the Jesuits. The society sounds on one hand like utopia; a happy, democratic society all pulling together for the good of each other.

In fact it was this success the ultimately led to the Jesuits expulsion.

When the Spanish king felt threatened and envious in equal measure, he promptly hoofed them out. On the other, the Jesuits benefitted from the labour of the Guaraní converts.

They made good trade through their exports and strengthened their worldwide religious domination. We can’t help but wonder just how christian-like it is to protect a population but only at the cost of their culture.

Cost of entry to the Guaraní Jesuit missions

Entry to the 3 sites is covered by one ticket. Foreign visitors pay ARG$230 per person although if you’re from Latin America it’s ARG$200 and Argentinian ARG$160.

The ticket is valid for 15 consecutive days and for entry to each site once. Visiting early in the morning, especially San Ignacio Mini and avoiding the weekend and holidays will help avoid those tour buses we mentioned.

Where to stay in San Ignacio Miní

Most visitors we met were on day trips on buses although there are quite a few hostels and posadas in the town of San Ignacio. Check out availability on booking.com here.

For camping, there are a few options:

Out of season and weekends, the riverside beach at Camping Playa del Sol was free and had awful bathrooms (so you wouldn’t want to pay) and free electricity (which doesn’t make up for a dirty loo, so still not worth paying for). If you’re camper van is self sufficient, it’s a perfect spot with great views.

We visited Nuestra Señora de Loreto towards the end of the day. There were no other visitors and we had 3 official UNESCO guides plying to give us their spiel.

They invited us to stay overnight in the car park. It may not sound great but it was. We had lovely clean bathrooms, a happy night guard and a peaceful night.

There are another couple of paid campsites around San Ignacio Miní but they’re quite expensive, even for Argentina. They’re all marked on iOverlander so if you need one, check out the latest reviews on there.

For more background information about the Guaraní Jesuit missions in Argentina, try to watch the Robert De Niro film, The Mission, before you visit. You can buy the video here. 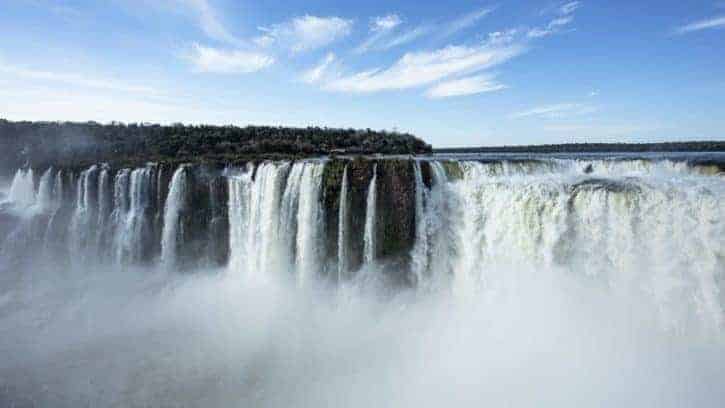 Next
Waterfalls in Argentina | Iguazu Falls & Beyond
Click here to cancel reply.