A Complete Guide To Busbars for Campervan Conversions & RVs

Posted on Last updated: April 22, 2022 by Author Angela and Graham

There’s a lot of debate about the best way to wire up a camper’s electrical circuits to the battery bank and Earth point. There are a few different ways to do this, but busbars are one of the most popular methods.

In this guide to busbars for campervan conversions, RVs and motorhomes, we’ll explore everything you need to know about this wiring method.

We’ll cover what they are, how they work, and the pros and cons of using them. Plus, we’ll share some tips on installing them yourself!

So whether you’re just starting on your campervan conversion journey or you’re looking for ways to improve your current set-up, read on for all the info you need.

Table of Contents show
What Are Busbars?
Busbar Materials
What Are Busbars Used For In Campervan Conversions, RVs & Motorhomes?
Is A Busbar Necessary In A Camper?
Advantages and Disadvantages Of Using Busbars
How Is A Busbar Rated?
What Size Busbar Do I Need?
What To Look For When Buying A Busbar
Single (Common) Busbars vs. Dual Busbars vs. Combined Fuse Block & Busbar
Protective Insulating Cover
Terminals
Continuous Amp Rating
Brand/Price
Best Busbars for Campers
Blue Sea
Common Busbars
Dual Busbars
ST Blade Fuse Blocks
Victron
Victron Busbars
Victron Lynx Distributor

A busbar (often called a bus bar) is a thick strip of metal connecting various circuits to the power source or earth point. They are commonly used in electrical distribution systems (not just in campers) to help transmit electricity efficiently.

Rather than attach every circuit directly to the battery, it’s easier to install a busbar to the battery terminal post. Each circuit is then attached to the busbar rather than the battery, making maintenance, installation, and future expansion easier.

Because they act as an extension of the battery terminal studs, an electrical system may have positive busbars and negative busbars.

The more conductive the busbar, the more efficiently it performs. As such, industry-standard busbars are made from copper. You can find aluminum and even brass busbars, but we recommend you steer clear of them as they’re less efficient.

Most busbars are coated to protect the copper against oxidation and corrosion, usually with tin.

What Are Busbars Used For In Campervan Conversions, RVs & Motorhomes?

A camper’s leisure battery bank may be tucked out of the way underneath a bed, front seat, or cupboard. The vehicle’s Earth point may also be underneath the driver’s seat. That makes them both pretty awkward to access for installation, maintenance, and future expansion.

Busbars are installed in campers in a location easy to access. Rather than removing a driving seat or crawling underneath a platform bed, you can more easily access the system with conveniently positioned busbars.

Is A Busbar Necessary In A Camper?

The short answer is no. The traditional way of installing a DC system was to connect the ends of each circuit directly to the battery bank’s positive terminal (or, more likely, the battery cut-off switch) and the Earth point.

Even if you decide to use busbars, you don’t need to use both a negative and a positive busbar. Instead, you could use one or the other.

Beware, some regulations, such as the ABYC, limit the number of wired connections to 4 on each terminal post. Even then, when you physically fit all your connections, the post or bolt might not be long enough to fit them all. The only way around this is to use a busbar.

When we converted Baloo, we didn’t install busbars. Now we’re considering making some upgrades to our electrical system and wishing we had!

Take a look at the pros and cons below to understand why we now recommend using busbars in new RV electrical systems.

Advantages and Disadvantages Of Using Busbars

Busbars have several benefits and are especially advantageous for simplifying the electrical installation in a campervan conversion.

The only real downside of using correctly fitted busbars compared to the more traditional method of configuring a 12 volt wiring system with only a fuse block is the cost of the additional components. A busbar configuration requires all the same components, plus the busbar.

However, the cost may be offset by the difference in cable costs. Without a busbar, every circuit will need a length of cable between the fuse block and the battery cut-off switch. That’s usually a small cable, and its cost per meter is usually less than thicker cable. With a bus bar configuration, you’ll need a larger cable, depending on how far from the battery and earth point it is installed. But because you only need one length, it may work out costing less.

How Is A Busbar Rated?

Some electrical regulatory bodies provide general guidance on how busbars are rated, and they focus on the ambient temperature of the operating position. However, many no-brand busbars apparently meet these guidelines but have been known to melt. That’s a recipe for disaster in any environment, let alone your camper.

The high-end busbar brands far exceed these guidelines. For example, Blue Sea busbars have a greater cross-sectional surface area for the same amp rating as some of their no-brand competitors, so they cool more efficiently.

It’s one of the reasons we recommend always using high-end components.

What Size Busbar Do I Need?

For example, let’s say you have 4 DC load circuits and 2 DC supply circuits:

Each busbar (positive and negative) must be rated at least 305 amps. We recommend erring on the side of caution and going up a size. That will also allow for future expansion.

What To Look For When Buying A Busbar

Like most electrical components for campers and RVs, there are a few factors to consider when choosing a busbar for your system. Here’s a quick buying guide to help you choose.

The wiring diagram for a circuit with busbars includes:

You can buy each of these separately. If you want to use both positive and negative busbars, you can opt to buy a dual busbar, which combines both busbars into a single component, like the Blue Sea DualBus Plus. The Blue Sea ST Blade Fuse Block takes this one step further, combining the fuse block with the dual busbar.

Combined units tend to have a cover over the busbars, protecting the electrical components from dust and accidental damage and meeting the regulatory body’s insulation requirements.

Individual busbars are usually sold without a cover, so you’ll need to add a compatible cover to your basket.

Busbars can come with various terminals and sometimes different types on one busbar. The screw terminals tend to be for thinner wires, up to around 12 AWG, so they are ideal for low current circuits. On the other hand, the stud terminals tend to be more flexible because they’re designed to hold larger current wires.

Consider the current on each of your circuits to decide which terminals are best for your system. You can add up to four circuits on each stud, so long as the combined maximum continuous current doesn’t exceed the busbar’s rating.

The busbar’s rating (continuous amp rating) is expressed in amps. Choose a size at least as big as the maximum continuous current and preferably one size bigger for future expansion.

They tend to come in sizes from 100A up to 1000A, though you should also check any current limitations on individual circuits.

You don’t have to shop around much to find low-cost busbars. However, as we’ve already mentioned, the high-end branded versions tend to exceed the regulatory guidelines, providing better protection and peace of mind.

They’re more expensive, but with so much current going through this one component, it’s not an area to scrimp on quality. Your safety could depend on it.

Blue Sea Systems are one of the most well-known busbars brands for marine and RV electrical installations.

Their range of busbars is pretty vast, from single common busbars of 150A right up to 1000A and dual combined busbars up to 150A. In addition, the Blue Sea ST Blade range of fuse blocks incorporate negative and positive busbars up to a maximum continuous current of 100A.

Victron is the powerhouse of all things electrical in the RV world. They produce top-of-the-range products and are well-known for excellent customer service.

They have a range of simple busbars from 150A to 600A, but they really put their big boy pants on with the Lynx Distribution System.

You can read more about how that system is configured and the advantages over a standard busbar setup in our article on ways to configure 12v wiring in camper. (coming soon) 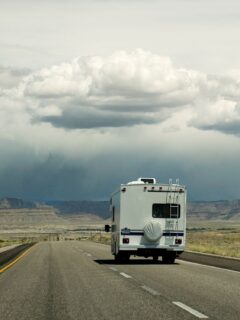 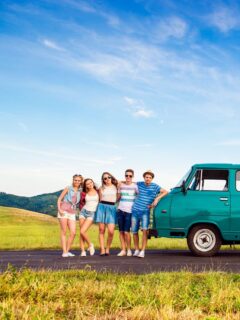