A Uruguayan family arrive to watch the sunsetting over the river in Montevideo, the father clutching a flask under his arm. In one hand he holds a bag of something we don’t recognise; in the other, an odd shaped cup.

As his wife and teenage children arrange deck chairs on the grassy, beachside knoll, he sips the cup’s contents from a silver straw.

Seating arrangements duly sorted, he takes a seat, tops up the cup from the flask and passes it to his wife. She sips from the silver straw too before passing it back to her husband for refilling.

The father passes the seemingly sacred cup onto his son. He returns it before the father refills it once more for his daughter. This ritual continues for as long as the family sit here.

This is our first day in South America and the first time we’ve seen this unfamiliar ceremony.

We’d noticed people carrying flasks throughout the day but assumed they kept warm a lunchtime soup or home-brewed coffee.

Little did we know then, the people of this region of South America, from southern Brazil and Paraguay to Uruguay and Argentina have a total obsession with yerba mate.

Everywhere we’ve been in Uruguay and Argentina, people clutch thermos flasks under their arms and sip from a silver straw burrowed into a cup of green leaves.

Everywhere! They’re on the beaches, boat trips, in cars and on buses. This is the South American obsession with yerba mate.

What is yerba mate?

But the similarity ends there. Drinking mate is as much about the social occasion, sharing ceremony and ritual as it is about getting a caffeine hit.

Drinking yerba mate is a cultural activity, and as with any tradition, follows a specific ritual.

It starts with a yerba mate circle. A mate circle is a group of friends, family or sometimes complete strangers, coming together to share a mate. It can be as few as 2 but more often a circle consists of 4 or 5. South American’s rarely, if ever, drink mate alone.

In order to drink mate (at least as a hardened mate drinker would), there’s some essential paraphernalia needed:

Traditional mate cups are the most popular choice among mate drinkers. A gourd is made from a calabash squash and needs to be cured before use to prevent cracking and mould.

Because the gourd absorbs some of the flavour, it enhances the taste of the mate each time it’s used.

To cure a new gourd, make a mate in another gourd or cup. Once finished, rather than throw away the damp leaves, transfer them to the new gourd, leaving them for 24 hours.

Repeat this process for 3 days to complete the curing process and the gourd is ready to use.

How is mate prepared & the drinking ceremony

Each mate circle has one host, known as the cebador. He or she is responsible for providing the mate, paraphernalia and water.

The cebador prepares the mate by stuffing a gourd about three quarters full of mate leaves and stems.

They insert the bombilla with the strainer at the bottom of the gourd, make a small hole in the mate leaves and top it up with hot water.

For quality assurance purposes, the cebador tastes the concoction.

If it’s good, passes the gourd to the person on the right, the straw pointing towards them.

They drink the mate a small sip at a time. When they’ve almost finished, they pass the gourd back to the cebador who adds more water, passing it on to the next person.

The people in the mate circle meanwhile just hang out, chatting, laughing and socialising.

The leaves in the gourd eventually start to weaken – a bit like reusing a teabag I guess. The cebador knows when to change the leaves, usually after at least a litre of hot water has been steeped through it.

Almost everyone we’ve seen in Argentina and Uruguay, carry mate paraphernalia around with them. A thermos flask tucked under an arm, a gourd held in cupped hands, a bombilla between the lips.

It’s like a drug addiction; nothing gets in the way of the mate. So when we came across the world’s largest mate producer in northeast Argentina, we had to pop in for a visit.

With 31000 hectares of land given over to yerba mate, the Las Marias plantation defines the countryside surrounding the town of Virasoro.

This is a family run business with the now elderly son of the founder, Víctor Elías Navajas Centeno the president of this huge company.

Las Marias started way back in the 1920s and after successfully implementing the full production line from seedling to packaged product, the company branched out into black tea.

80% of Las Marias’ products are consumed by the Argentinian market, the remainder exported around the world.

A tour of the plantation

Despite the size of the company our English speaking guide, Virginia, helps us see how Las Marias has managed to maintain a small company feel, building a community in and around the plantation.

Today Las Marias employs around 2000 people, and is as socially responsible as an employer as you’ll find anywhere.

Las Marias have invested heavily in protecting the natural environment and wildlife in and around the plantation. Education is provided to employees children, healthcare and even homes for those in need.

Virginia guides us with pride through the plantation. She drives us in the pouring rain to see the nursery, tea plantation and yerba trees. She talks us through the packaging process, showing us 8 machines each churning out 2000 packets of mate every hour.

They run 24 hours a day, all year round. We see trucks stuffed to the gunnels with yerba leaves and stems, unloading in the drying rooms before being prepared for a 4 hour roasting.

As we pass by the huge storage sheds where the mate is aged for upto 15 months, Virginia points out the visitors restaurant, where her husband works. For her too, this is a family business.

As Virginia drives us around the grounds of this enormous plantation, it feels as though we’re being guided around one great big mate circle.

And in our experience, being invited into a mate circle and joining such a traditional ritual is a fabulous way to meet people and feel incredibly welcome.

So much so, we’ve even invested in our own mate paraphernalia! So if we see you on the road, expect an invite to sip from our own cured gourd. 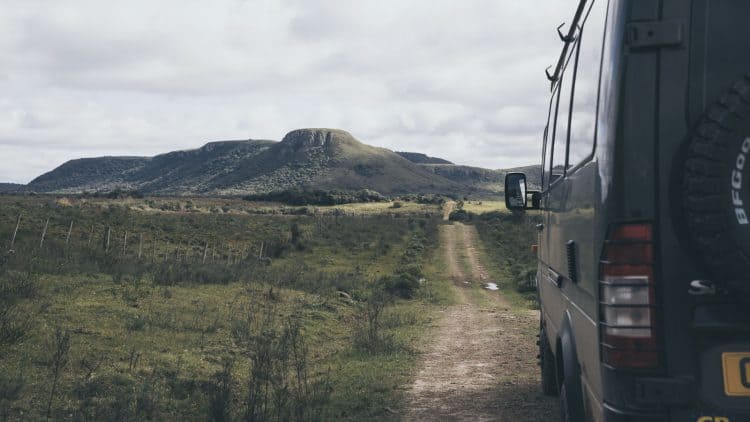