Depends on problem; could be anywhere from 5 minutes to several hours

Buying an RV signals to the world that you enjoy camping — but not too much. You still like to be able to curl up in a warm bed at the end of the day while all those suckers in their tents freeze like popsicles overnight.

But what happens if — gasp — your RV furnace blower won’t start? Maybe it’s not blowing hot air, or you can’t get it to ignite at all — what then?

The most satisfying answer (stealing tents from the campers to build yourself a little bonfire) is also a teensy bit illegal, so you’re probably going to need to figure out how to fix your RV furnace blower yourself.

Fortunately, it’s not the hardest problem to solve. If you have some time and a little bit of mechanical know-how, you can most likely fix the issue yourself without having to call in a professional.

Unfortunately, RV furnace blowers are complex enough that it’s pretty much impossible for us to pinpoint a single issue that’s likely to be the cause.

Instead, we’ll go over a few things that could be going wrong with your furnace, then we’ll tell you what the most likely culprits are and show you how to fix them.

Warning! You will most likely be dealing with propane, diesel and electricity at some point, so be very careful and take all necessary precautions. If in doubt, ask a pro to handle the situation for you.

Your RV Furnace Blower Won’t Start At All

If you can’t get the furnace to kick on at all, it’s most likely a power issue. That could mean it’s something as simple as replacing a battery or as complex as fixing faulty wiring.

There’s only one way to find out, though, so grab your voltmeter, turn it on, set it to “DC voltage,” and meet us at your onboard battery.

Read more // How to Use a Digital Multimeter

The Battery’s Dead or Damaged

Touch the red lead on your voltmeter to the positive terminal of your onboard battery and the black lead to the negative post. Most furnace blowers on RVs need about 12.3 volts to fire properly, so if you’re not getting that much juice, the battery is probably the issue.

You can charge the battery for a few hours and then test it again. If the issue hasn’t improved, you might have a damaged battery. Try to find another battery capable of producing 12.3V and see if it can start the furnace blower; if it does, problem solved.

Of course, if the battery doesn’t have any juice at all, it’s dead. It’s time to check your charging methods and if the battery needs to be replaced.

The Battery Terminal is Corroded

This may seem like it should fall under the above category, but the good news is that a corroded battery terminal may be fixable. All that corrosion can lead to buildup that interrupts the flow of power, but if you remove the buildup, you might be back in business.

Warning: Under no circumstances should you touch the negative terminal or any part of the RV and the positive terminal at the same time! If unsure, seek professional advice.

To clean a corroded battery terminal, simply do the following:

You wouldn’t expect to see corrosion on anything other than an FLA battery. If corrosion was the issue, this should fix the problem. If not, you’ll have to move on to other solutions.

If there was an issue with the voltage at any point, you might’ve tripped your circuit breaker. This is an incredibly easy problem to fix — simply go to your circuit breaker, see if any of the circuits (especially the one labeled “furnace”) are in the OFF position, and if so, turn them on.

This may be all it takes to get your furnace up and running again. If not, though, you’ll need to check out your wiring. Before you do anything with your wires, though, be sure you’ve disconnected everything from the battery.

Wires Have Become Loose or Disconnected

Go to your furnace and inspect the wiring to see if anything has become visibly loose or disconnected. Life in an RV can be rough-and-tumble, and the vibrations caused by driving over uneven terrain can cause connections to fall out. If so, simply reconnect them and check to see if that fixed the issue.

You should follow the wires as far as they go. This means checking at the furnace, the battery, and the thermostat, as well as anywhere in between.

Depending on the layout of your furnace, this may mean simply reconnecting wires, or it could mean having to secure them with wire nuts.

If all the connections are still secure, there might be an issue with the wires themselves. If you are in anyway unsure about working on live electrical circuits, please seek professional advice.

Wires Have Become Stripped or Damaged

If the wires themselves have become damaged, you’ll need to replace the damaged areas before they’ll work properly again.

Replace wires or sections of wires using the same size cable, and crimp joints covered by heat shrink. Reroute cables so they are not laid anywhere they could be damaged again.

Your thermostat controls the furnace, so if you can’t get the furnace blower at all, you might have an issue that experts call “the thermostat done gone kaput.”

Thermostats are designed to have a long lifespan, but we all know how that works once you’re out on the road. Check it to see if the display is functioning properly; if it’s blinking or giving wildly inaccurate readings, you might just have a loose wire (we thought you told you to check that).

If the display won’t come on at all, then the whole unit might need replacing. Before you buy a new one, though, try just replacing the batteries on the thermostat itself (they usually take AA or AA batteries). This is something of a long shot, but it certainly doesn’t hurt to try.

However, if the wires are all attached properly and new batteries didn’t help, it probably means the internal sensor failed and you have to replace the entire unit.

If none of the above worked and the RV furnace blower won’t start again, then you’ll probably have to call in a professional.

Your RV Furnace Blower Turns On But Won’t Ignite

If the furnace blower will turn on, that means it’s unlikely to be a power issue. Instead, you’ll have to check a few other places to pinpoint the problem.

A Problem with the Pilot Light

This issue may sound deceptively simple — after all, you just need to re-light the pilot light and you’re done, right?

Unfortunately, though, pilot light issues are usually indicative of problems with the igniter or power source. Since we’ve already inspected our power supply and ruled it out as a culprit, you’ll likely need to replace the igniter. Again, if you’re unsure, seek professional advice.

The sail switch will turn your furnace off if there’s not enough airflow (this is important, as apparently carbon monoxide will kill you). If there’s a clog in the air intake or exhaust vents, your sail switch may permanently stay off. This prevents the igniter from sparking.

Your first step is to clean the vents thoroughly. If you notice cobwebs or soot around the vents, it’s likely that your system isn’t properly ventilated.

After you’ve cleaned out the vents, turn your furnace and thermostat off and leave them that way for at least a minute. This resets the system, including (hopefully) the sail switch.

The thermocouple is a component in your furnace that looks to make sure the pilot light is on before releasing gas into the system. As it turns out, releasing gas without igniting it kills the humans inside (everybody is so picky about what they’ll inhale — well, everybody except our cousin, Earl).

If the thermocouple goes bad, the furnace won’t release any gas at all. You may be able to just clean it if it’s covered in dirt and debris, but otherwise you’ll need to replace it.

Check it with a multimeter before throwing it out, though. Also, be on the lookout (on the smell-out?) for a rotten egg odor when you first turn the furnace on, as that can mean the thermocouple isn’t working properly.

If you feel some heat, but there’s just not enough airflow to warm up your cabin, then it might mean the fan motor is on its way out.

It could also mean that there’s something impeding the fan blades, which can happen if your RV has been sitting for a while. You might just need to clean it out.

While you’re cleaning it, inspect it to make sure all the wires are properly connected and in good shape. If everything looks good but there’s still not much airflow, you’ll probably need to replace the motor.

Your RV Furnace Blower Starts and Stops (and Other Assorted Problems)

If your furnace works — but you can’t get it to keep working — then this is usually due to a ventilation issue.

Your vents could be pointed directly at the thermostat, causing it to think that your RV is warmer than it really is.

If the burner is going on and off, it’s due to the heat exchanger overheating, at which point the high-limit switch will cut it off. This is usually due to a blockage in the vents causing poor air circulation.

If the furnace works perfectly fine during the day but dies overnight, it’s most likely a battery issue. Your battery is probably on its way out, and a new one should do the trick.

What to Do If Nothing Works

The steps above should solve the vast majority of RV furnace blower won’t start issues, but if you’ve tried them all and you’re still having no luck, it may be time to call in a professional. They’ll be able to inspect your rig in detail to determine and fix the problem.

While you’re waiting for them to show up, just sit back, relax, and throw another tent on the fire.

Want to know how to santize your RV water tank? Read here.

Previous
How to Build a DIY Van Roof Rack 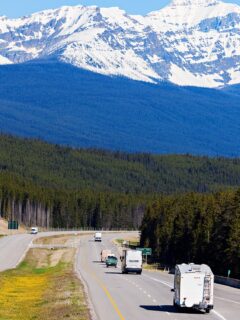 Next
5 Best Places to Camp in Banff and Jasper National Parks in a Van or RV
Click here to cancel reply.